Cars can be sexy. Fact. Some cars attract people. People see them and they want to drive them, they want to be seen near them. They want to be in them. When you think of a sexy car, what springs to mind?  I would guess that some of the James Bond cars would be high on the list. Sports cars with the roof down, speeding along the seaside, chasing the sunset with a beautiful person sitting next to you.

Some colours can be sexy. If you think of a sexy car, you might also think of Ferrari Red, or Midnight Silver in the metallic finish.

Some noises can be sexy. You might think of a highly tuned engine revving over the RPM limit, on the start line of a race. Or how in cruise control the purr of the engine shows the driver how to be smooth, and in control.

Whatever defines “Sexy” for you, I am sure that there are some cars that fit the bill. 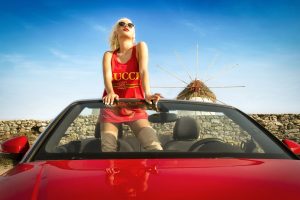 The Aston Martin V8 and the Aston Martin DB range position themselves high on the list for a sexy automobile. Ever since the launch of the V8 in the late 1960’s the Aston Martins have been a car to dream of. Since James Bond made them famous their cult status as a sexy car has gone from strength to strength.

If you watched Dukes of Hazard you might be drawn to a Dodge Charger. It is a car high on the wanted list for car movies and fanatics alike. In the 1960’s the Dukes boys showed us that the Charger was a fast, eye-turning beast of a car. Driven by bad boys, attracting the girls, escaping the law. In the 2000’s the Fast and Furious franchise has taken the charger to new heights. New look and feel, whilst maintaining the muscular, free-spirited, bad boy image.

For the more refined Lady and gentleman, getting into a Bentley, or a Rolls Royce gives a sense that the driver has money and status. Owned by people with the confidence that top quality cars exude. How romantic is being driven by a chauffeur whilst drinking a chilled bottle of champagne in the back? Add to that the dividing screen between the driver and the back seat passengers, and romantic times can happen on the way to the hotel, as well as all weekend long.

With the Italians famous for romance, they must figure in a sexy car list. Surely the Alfa Romeo must be up there with the best of them. Despite some famous performance issues, we can not deny the look, feel and sheer joy that a good drive in an Alfa can bring. The look of the newer models shows that they are still high on most people’s sexy car lists.

Now, how can you finish off a list like this without considering the Ferrari’s, the Lamborghini’s, and the Bugatti’s. Which of those 3 would you like to see on the list, and which is just too flamboyant these days and tries too hard?

Whatever your idea of a sexy car, sometimes it all comes down to budget. However, with over 20,000 cars to choose from and the occasional used sports car in our garage, Match Me could help you see out the Month of Love in a nice new sexy car.

If you would prefer to speak with one of our Finance Executives before making an application, please don’t hesitate to call or request a call back. Thank you for visiting, we hope to see you again soon!

Match Me Finance Ltd (Company No. 11224794)T/A Match Me Car Finance is authorised and regulated by the Financial Conduct Authority (FRN No. 803714). We are registered with ICO (Information Commissioner’s Office) (No. ZA322036). Applicants must be 18 or over, terms and conditions apply, guarantees and indemnities may be required. We are a credit broker, not a lender. All finance is subject to status and income. Written quotations on request. We can introduce you to a limited number of finance providers and other brokers who may be able to offer you finance facilities for your purchase. We will only introduce you to these finance providers. We may receive a commission payment from the finance provider if you decide to enter into an agreement with them.