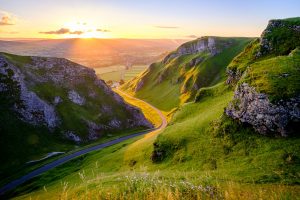 The journey from Manchester to London is a motorway, or a train journey, or you could take the scenic route. There are so many beautiful heritage sites in the UK that you could spend every weekend trying to visit them all. You would still have some to go. There are 3 drives to get to London, you could go the central path down the M40. The western route through Shropshire and the Cotswolds gives some amazing countryside views and a taste of Shakespearian England. The eastern route through the Peak District and Nottinghamshire gives a taste of Robin Hood and British History. Oh, and some Bakewell pies for journey food.

London will always be there, why rush to get there when there is so much to see on the way?

Taking the Western route gives you some lovely drives through Shropshire. The winding country roads, the quaint villages, the inclines and even a Roman Road. With the hills of Cheyney Bank, Hope Valley and Harley Hill there are some interesting climbs. I hope that you do not get stuck behind a tractor! Any road trip would not be complete without some ‘interesting’ trivia. Did you know that British Corned Beef was originally from Shropshire? Although it is an Irish dish. There are over 30 castles in Shropshire. The first Olympic Games were held in Shropshire in 1850.

From Shropshire to the Cotswolds, beauty to more English beauty. With medieval towns, valleys, dales and countryside galore, it is a truly beautiful part of the country. Parts of the Cotswolds date back to Roman times and some are more dated within the Anglo-saxon era. With that much history, it is worthy of a slow drive through. With Burford being voted by Forbes as one of the best places to live in England, worthy of a visit and then driving through Chipping Norton and Woodstock, and on to Tewkesbury there is plenty to see. Old houses, churches, stately homes and charming villages will give your passengers a road trip to remember, whilst the driver focused on the winding country roads, the trees covering the corners and the dips and curves that will make it a memorable drive. 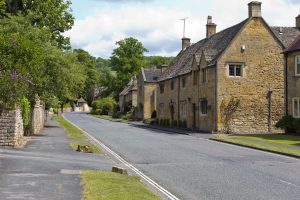 Or taking the eastern corridor through the peak district and Nottingham gives you the famous Snake Pass. A road opened in 1821 and at over 1600 feet above sea level, the views from the top are fabulous. This was listed as one of the best roads by Autotrader in 2009. Winnats Pass is a protected site due to all the fossils and limestone that guard the road up the valley. The neo-gothic Derwent Dam built in 1916 filters nearly all the water for Derbyshire and looks amazing, especially on a warm summer’s day.

On to Nottinghamshire, and the jewel in the crown, Newstead Abbey. Home of Lord Byron and on the banks of the river Leen, the picturesque countryside is a great place to stop for a picnic on your way to London. If you time your trip right, you could spend a day at Nottingham Races, visit Sherwood forest and visit Wayne Manor from The Dark Knight Rises movie. So much to do in Nottinghamshire, you might not make it to London.

As London now approaches, you can sit back in the car you bought from Match Me, and thank the team for the car, the finance, and the memories before you enter the hustle and bustle of London Town.

If you would prefer to speak with one of our Finance Executives before making an application, please don’t hesitate to call or request a call back. Thank you for visiting, we hope to see you again soon!

Match Me Finance Ltd (Company No. 11224794)T/A Match Me Car Finance is authorised and regulated by the Financial Conduct Authority (FRN No. 803714). We are registered with ICO (Information Commissioner’s Office) (No. ZA322036). Applicants must be 18 or over, terms and conditions apply, guarantees and indemnities may be required. We are a credit broker, not a lender. All finance is subject to status and income. Written quotations on request. We can introduce you to a limited number of finance providers and other brokers who may be able to offer you finance facilities for your purchase. We will only introduce you to these finance providers. We may receive a commission payment from the finance provider if you decide to enter into an agreement with them.